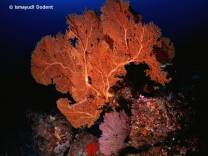 Sumatra is one of the few remaining undiscovered large islands of Indonesia, for diving, but also for its tribes, rainforest and animal kingdom.

Sumatra is the most western and second largest province in Indonesia. It is one of the most rugged, thrilled, undeveloped and unexplored places in the world. It is not primarily known for scuba activities, but more for its stunning wildlife often used as a base for some of the best television documentaries. You can spot wild orangutans up in the canopy, aggressive huge crocodiles in its enormous rivers, tigers and leopards in its dense forests and riding Sumatran elephants seeing it all. Its wild wilderness is one of tropical rainforest, volcanic mountains, waterfalls and huge rivers famous for rafting. Its flora and fauna is spectacular. Bukit Barisan Selatan National Park in the south is the place where the world's largest flower the Rafflesia is very common. There are many National Parks such as Mount Leuser National park, Way Kambas nature reserve and the Berbak Wildlife Reserve, all excellent for seeing wildlife. It is one of the few remaining countries with more than fifty different tribal languages all with different daily rituals and habits. Chances of monsoons are present almost every day although the period from June to September tends to be slightly dryer.

Best known areas in the north of Sumatra are Banda Aceh and Pulau Weh. Here, diving is possible on top of one of the most diverse marine environments of Indonesia. Visibilities are not as good as elsewhere but still hover between 5 and 30 meters. The provincial capital Medan is known as a gateway with some stunning mosques, palaces, bazaars and the largest crocodile farm in Indonesia. The northern Bukit Barisan Mountains formed by a sequence of volcanoes offer many spectacular lakes. Crater Lake Danau Toba or Toba Lake is one of the most spectacular lakes in Indonesia, with undisturbed blue waters ringed with steep mountains right in the center of the Batak highlands. To the east, just south of Singapore, you can find the rich Riau Archipelago. Rich because it has always been in the heart of the spice trade route and connections with neighboring countries such as Malaysia is very strong.

The provincial capital of Padang is the main gateway to western Sumatra offering a stunning shoreline with many crisp lakes and steep mountains at the Minangkabau highlands. The south of Sumatra is flatter with more fertile plains and many islands such as Banka and Belitung Island. Mentawai Islands and Enggano can be found in the southwest. A boat trip on the Musi River with its many traditional Limas houses on stilts is a must while traveling around the south. The area Lampung with its capital Bandar Lampung (former Tanjungkarang and Telukbetung) is the main connection with Java.