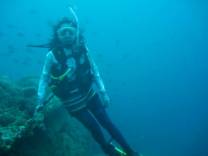 Papua, divers better know it as Raja Ampat, is one of the final frontiers for scuba diving.

Papua and its western province West Papua, both together the western half of Papua New Guinea, is one of the last frontiers for divers. Divers will better know it as Raja Ampat which might be one of the richest dive areas in the world above and below the surface. The province, former known as Irian Jaya, is highly inaccessible with not many paved roads, it is filled with jungle and many tribes still live here without knowledge of what goes on in the rest of the world. This is probably why it attracts the more adventurous diver because coral reefs and dive sites are still remote, quiet, untouched and most not even cataloged.

Up till now, the only region slightly known to divers are the Raja Ampat Islands and then in particularly Misool, Waigeo, Salawati, Kri Island and Batanta. It is thought that Irian Jaya might be blessed with the most diverse and rich underwater environments in all of Indonesia, mainly because of its widely varying topography such as walls, caves, mangroves and brackish lagoons. Many different species of fish are still discovered up till today.

In the northwest of West Papua, you can find the Raja Ampat area with the better known islands Misool, Waigeo, Salawati and Batanta, also known as the bird's head peninsular. Raja Ampat means four kings referring to the four sultans that used to rein West Papua, former called Irian Jaya. The village of Sorong is the start off point on a liveaboard trip to the Raja Ampat Islands, a stunning selection of steep mountainous islands with white sandy beaches and turquoise bright shores. Fish life is enormous mainly because the traditional Papua's don't use dynamite fishing yet and hopefully they will never have to. Aquatic life is as diverse as it can be with many kinds of tropical reef fish, pelagic and invertebrates. Sharks such as wobbegongs and the small Epaulette Shark are often found lying on the sea grass. Giant clams in all colors are found on its colorful and crowded hard coral reefs. Its variety of marine life scales directly to its stunning and changing underwater topology. You will find deep drop-offs, healthy flat coral slopes, mangroves and shallow warm water lagoons. Dolphins, manta rays, whales and turtles are some of the larger animals found here.

Misool offers stunning soft coral formation, vivid and found in all colors and shapes, while Waigeo Island is best known for encountering macro underwater life. If you are looking for large schools of fish you should visit the Kri area where currents have created a rich nutrient environment for aquatic life. Other islands that offer unforgettable sights and underwater encounters are Kawe, Minyahun, Bantang, Penemu, Wayag, Batanta and the Padaido archipelago in Biak. But there are too many islands unexplored and while diving here, your boat captain might be interested in exploring an area never dived before.

Visit our partners! Or become one.

The inner seas of Indonesia are home of the richest Marine Biodiversity in the world. SMY ONDINA, a romantic and modern wooden schooner, will take you where J.Y. Cousteau said it is probably "The best diving in the world".: Komodo, Wakatobi, Rajah Ampat, Alor, Flores, Banda, Lembeh Strait,Maluku....and many more!

As a capital city of Papua Barat, Manokwari is a pleasant base from which to explore world-class diving in Dore Bay (Teluk Doreri) and Cenderawasih Bay Marine Reserve. Dore Bay rests many Japanese war ships and planes from the World War II. One of the wreck dive site near Hotel Mangga rests a huge Japanese cargo ship (Shinwa Maru, 120m long) with good shape on the depth of 35 meters! Cenderawasih Bay, meaning the Bay of “Bird of Paradise” (a symbol of Papua), is the largest marine reserve in Indonesia. It features world-class diving sites with 130 species of coral, and is also home to endangered species of giant clams, turtles and dugongs. Diving condition in Manokwari and Cenderawasih is great with very good visibility of 15-45 meters. The coral and fish are abundant and diverse. You have good opportunities to encounter giant wrasse, humphead parrot fish, big schools of barracudas / jacks / trevallies, octopus, sharks, hawksbill turtles, dolphins, giant clams, etc.

Manokwari has many wreck sites of Japanese war ships and planes from the World War II, including Cross Wreck & Shinwa Maru, best dive-season March-November. There are flights available everyday from Jakarta to Manokwari (take over 4 hours, transfer at Makassar). The available airlines are Batavia (www.batavia-air.co.id), Lionair (www.lionair.co.id), Expressair (www.Expressair.biz), Merpati (www.merpati.co.id) & Sriwijaya Air (www.sriwijayaair.co.id). Another option is from Manado to Manokwari. Manado has international regular flight (Silk Air, www.silkair.com) from Singapore, and has domestic flights by Sriwijaya or Expressair to Manokwari (take less than 4 hours, transfer at Sorong), but the domestic flights are not available everyday.